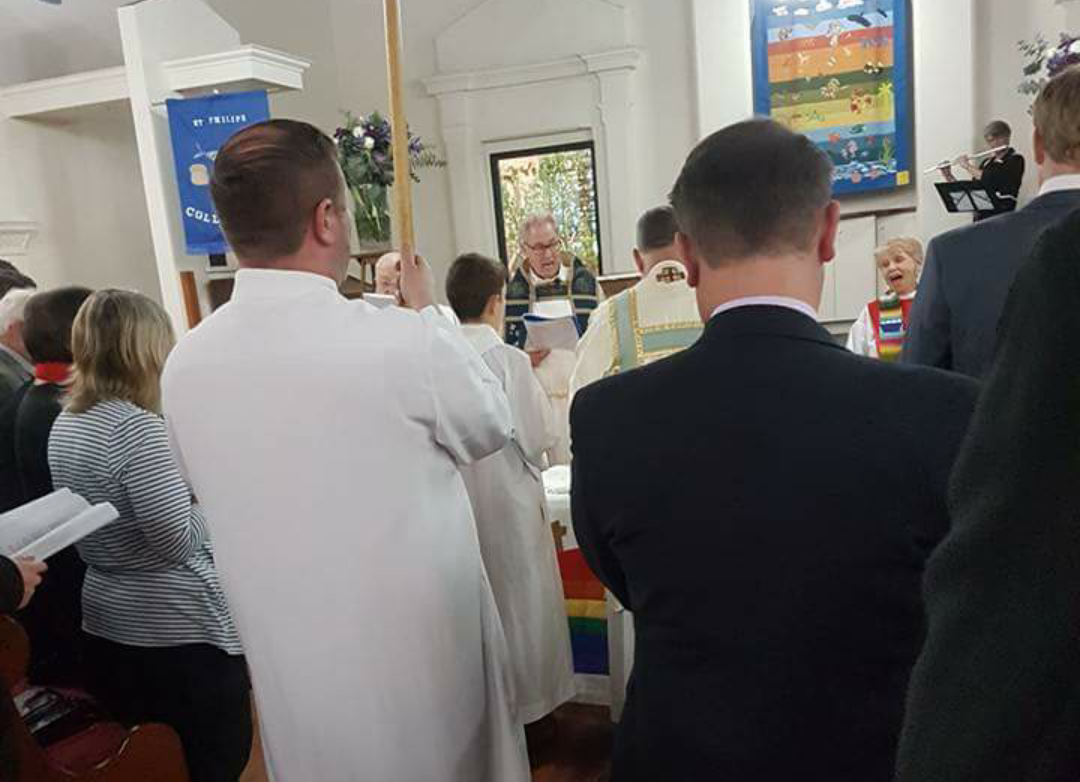 davidould.net has received video and photos from a same-sex wedding that took place on 12 May 2018 and involved a number of licensed Anglican ministers. The ceremony was quite clearly a liturgical celebration and was supported by and officiated over by at least 3 retired clergy who still hold Permission to Officiate (PTO) in the Diocese of Melbourne and was also clearly promoted by and endorsed by one prominent parish.

The ceremony took place at the Community Church of St Mark (Clifton Hill Baptist Church) in the inner north suburbs of Melbourne.

The video is of the processional at the beginning:

The following retired clergy from the Diocese of Melbourne are clearly identifiable: Roger Featherston is recorded on the Diocese website as retired and currently holding a PTO. He presided at Black Rock Anglican on Palm Sunday 2018 and previously was locum at Mt. Eliza and  Long Beach Anglican. He currently holds the title “Honorary Associate Priest” at St Andrews, Brighton. He is currently still listed as an authorised religious celebrant for marriages. Fred Wandmaker is also retired and holds a current PTO in the Diocese of Melbourne. He is a public supporter of the redefinition of marriage. Much of Wandmaker’s ministry has been amongst and in support of aboriginal people.

He is currently still listed as an authorised religious celebrant for marriages. Rev. Moore (not to be confused with David Charles Moore, also of Melbourne) is another public supporter of redefinition of marriage. He is currently still listed as an authorised religious celebrant for marriages. He is currently connected with the parish of St Philips, Collingwood.

Moore presided over the wedding and also the accompanying celebration of Holy Communion, which is consistent with his position at the end of the procession and his wearing of a chasuble. His wife was one of the servers in the procession and is on the current St Philips parish council. The video and photos sourced by davidould.net along with further investigation make it quite obvious that this was a registered wedding and those attending understood it as such. David Moore presided at the ceremony and there is clearly a signing of paperwork.

We have not yet been able to establish who the actual official celebrant was; davidould.net has made enquiries of Births Deaths and Marriages Victoria. If one of the three clergy named above was that celebrant then they acted in violation of their government marriage license which only allows them to conduct marriages in accordance with the rites of the Anglican Church of Australia.

Update 28 May 7pm: Murray Campbell has confirmed the identify of the celebrant who signed the marriage certificate:

Update (Monday 7pm): I can now confirm that the officiating celebrant was Rev James (Jim) Barr. Rev Barr was formerly the Senior Pastor at Collins St Baptist and at Canberra Baptist. He is now a Welsh Methodist credentialed minister, and thus no longer holds a baptist licence. It is however unclear how how substantive his role was in this service, given that Baptist and Anglican clergy were also participating. In other words, one question is answered, but the original concerns remain, and they are substantive concerns for Baptists and Anglicans alike.

further update 29 May: the following clergy have now been identified subsequent to publication Marita Munro is a baptist minister associated with the Athol Gill Centre which is located at Community Church of St Mark.

She teaches at Whitley College. She is famous as the first woman ordained in Australia. She currently chairs the Baptist Union of Victoria Ordination Discernment Group and its Historical Society, and serves on its Advisory Board. Those positions may now be called into question. James “Jim” Barr is the former Senior Pastor at Collins St Baptist and at Canberra Baptist. He is now a Welsh Methodist credentialed minister (although wearing a very Anglican cope in the service) and is listed on the Attorney General’s website as an authorised marriage celebrant with the “Welsh Calvinistic Methodist Connexion In Victoria“.

We have confirmed that Barr was the legal celebrant at the wedding but we have been unable to establish whether the rites used were those of the Welsh Calvinistic Methodist Connexion, as required by Federal law.

It is now evident that the wedding was planned in order to avoid breaking the letter of each denomination’s law while clearly violating their spirit. The Baptist Union of Victoria prohibits its ministers from conducting same-sex weddings but has no equivalent prohibition on its buildings. The Anglican Church prohibits both minister and building. Thus we have the use of a baptist building, with Anglican ministers who are not technically officiating at the wedding although they clearly take a significant part in it (Rev. Moore essentially conducted the service). Finally a former baptist signs the paperwork.

It is a clear challenge to the teaching, doctrine and good order of at least 2 major denominations. The wedding had a high degree of overlap with the Parish of St Philips Collingwood. One of the parties to the marriage is a long-standing church warden of the parish, Jonathan Gill. davidould.net has chosen not to directly identify the other party.

The event was not kept secret from the St Philips church family, being promoted on their website. davidould.net has been told that the event was publicised and celebrated in the parish.

The banner of the parish was processed (along with another banner from “St Marks”, presumably representing the “Community Church of St Mark” where the wedding was held). 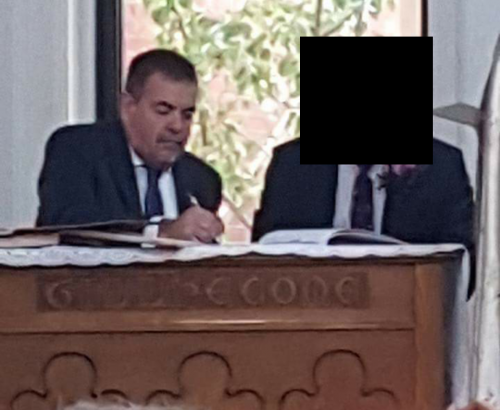 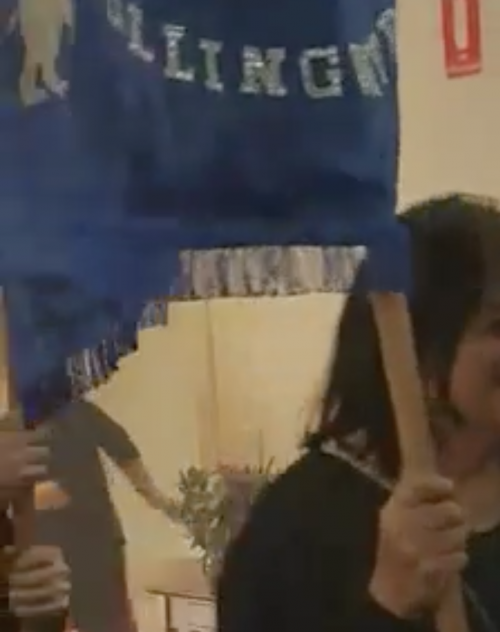 Given the prominence of this event in the life of the St Philip’s church family (involving one of their most significant lay members), the promotion on their own website, the use of their banner at the event and clergyman associated with the parish presiding over the ceremony, it is almost impossible to conceive that Bishop White did not know about it.

The active participation and promotion of the wedding by a number of licensed clergy in the diocese and one prominent parish will be seen as yet another challenge to the Archbishop, Philip Freier. In recent weeks one of his archdeacons has opposed the bishops’ position paper on marriage and before that another open advocate of changing the church’s doctrine on marriage was announced as the new bishop of Gippsland. Over the past few years a number of bishops in the Province of Victoria (of which he is Metropolitan) made various statements supportive of marriage redefinition.

We have reached out to the Diocese of Melbourne for comment on this story and, in particular, for clarity on what response might be expected for any clergy who have acted in this way. 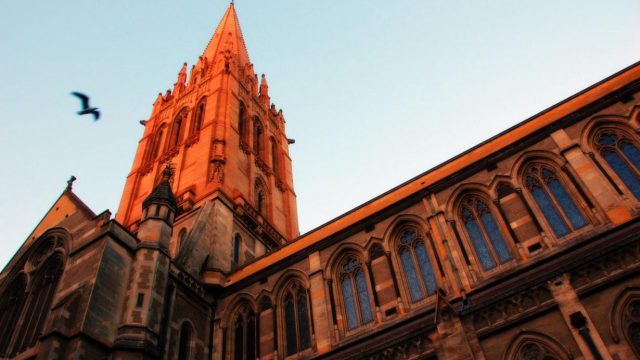 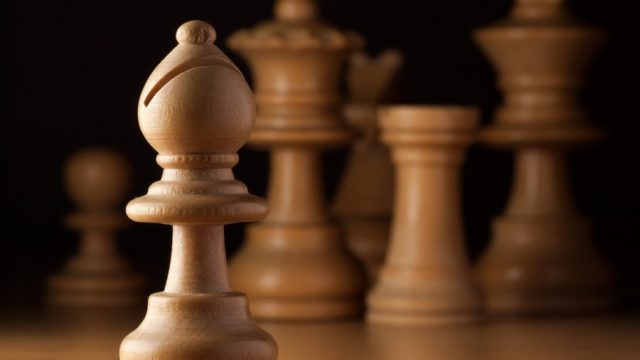 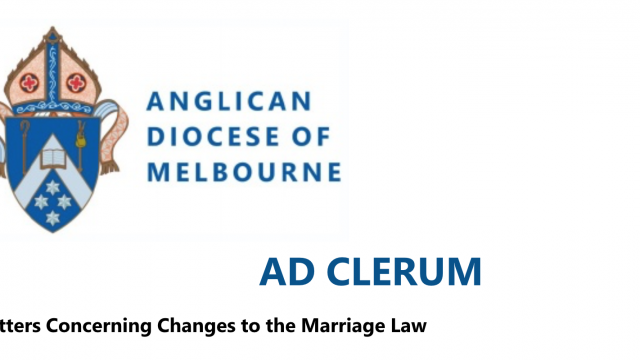