so, this afternoon Jacqui and I left our little girl with the most excellent Windsors and went to the cinema to watch Pride and Prejudice, courtesy of a pair of free tickets we were gifted a while ago.

What follows, obviously, contains spoilers but, frankly, if you are still unaware of the basic plotline (i.e. you’ve never read the book, or even seen the wonderful BBC adaptation) then you deserve to get spoiled, or whatever the verb maybe.

To be fair, Keira is a far more convincing woman in her early 20’s than Jennifer ever was. Jennifer was, perhaps, too confident whereas Keira has more of the girlishness about her. That being said one thing bugged me throughout the film; at key moments if you shut your eyes when listening to Keira it might as well have been Jennifer – the pace, the intonation, everything was just like Jennifer. It could just be that Keira made the mistake of watching the BBC production just one time too many and had assimilated too much.

At the start this wasn’t even close. Matthew simply didn’t smoulder as much. What was interesting was that the character development of Darcy (i.e. that we start off thinking he’s a real arrogant snob and slowly find out that he’s just, well, lovely) was far more believable with MacFadyen.

You can’t tell it from the photo but Simon Woods played up Bingham as a bit of a posh twit in a way that Bonham-Carter never did. In fact, by the time I’d seen Bingham twice all I could think of was Tim Nice-but-Dim. It got annoying after a while, he was a pleasant idiot. Where Bonham-Carter played a naive man, Woods played the fool. 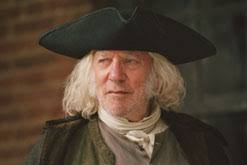 Whitrow had a wonderful sarcastic edge in his delivery that Sutherland didn’t even try and emulate. For a while this left me rather disappointed but, as the film progressed, I began to appreciate the alternate presentation of Bennet as not a man aloof from the idiocy of his wife and daughters but one trapped by his unwillingness to deal more firmly with them. It worked. Despite how likeable Whitrow’s portrayal was Sutherland pulled off an equally sympathetic and eventually convincing performance.

last, but certainly not least…

If ever they were going to cast someone to challenge Steadman it would be Blethyn. From the moment she launched into her first wail of despair Blethyn made the role her own. To be frank, if you can whinge well then you’re all over this role and, unlike other characters, Mrs Bennet is spectacularly one-dimensional. Nevertheless Blethyn was excellent and, unlike every othre role, never left you yearning for the typecast character.

Now, onto the other stuff:

The Script
Frankly, it was disappointing. Where it held to the novel it was great, but for some reason Working Title felt the need to move away from the story on a number of occassions, not least towards the end where it all went a bit slushy. But that wasn’t just because of the script, something else marred the overall feel of the movie…

The Vibe
I’m not sure what other title to use here. Pride and Prejudice 2005 opened up a much more earthy and, dare I say it, real early 19th Century Britain. There was none of the prettiness of the BBC version – it just felt more believable. The Bennets’ house was a mess, the dancing was more energetic and the ball room more cramped. There was even horse manure on the road. Everything contributed to a wonderful Georgian late-Classical feel. Perhaps it was helped by being projected on the big screen but the scope of the scenario being painted drew me in.

And then it all went horribly wrong.

Late-Classical became romantic. All of a sudden we were subjected to a different style of wide landscape. Elizabeth stood sillohuetted on Stanage Edge, just round the corner from where I grew up. The mood got darker and we started getting a hell of a lot more rainstorms. The script went downhill as well. Even a visit to the majestic Chatsworth House (also round the corner from home) masquerading as Pemberly couldn’t restore the wonderful world that the director had given us.

Gone was the stunnngly clever photography with characters framed by the scenery, particularly those shots that made best use of the Georgian door frames with their wonderful golden rectangles. Gone was the managed wildness of the earlier scenes. Gone was Jane Austen and in her place was a slushy Charlotte Bronte, with Darcy suddenly emerging out of the rain with a shirt unbuttoned.

So, we left a bit disappointed. It was all going so well and then it sold out to Romanticism and the need for a blockbuster ending.

Sitting here tonight, though, I’d thoroughly recommend going to see it. Despite the flaws it’s a remarkably charming piece. Colin Firth might not be under any pressure but the whole thing certainly gave the BBC production a run for it’s money. It was just such a let-down at the end.

Except for Mrs Bennet.
Oh, my nerves. My heart is all a flutter from palpatations. No-one suffers like I do.

10 Questions from the Atheists