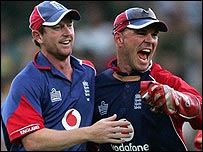 just got back from the Sydney Cricket ground after watching England simply crush Australia (no other words are adequate) to take the one-day series here. I am amazed since, frankly, despite us winning the first of the three games I thought Australia would come out hard.

They didn’t. They came out soft and even though the game was eventually rained off before the end it was clear that England had won. The scorecard makes the nature of the defeat clear:

There were 2 golden moments. The first came in McGrath’s last over. Australia’s veteran fast bowler was playing his last ever game in Australia and the crowd clapped the whole of the first 5 balls then stood, 40,000 strong, to applaud his run-up for the last ball. And it was a wicket! 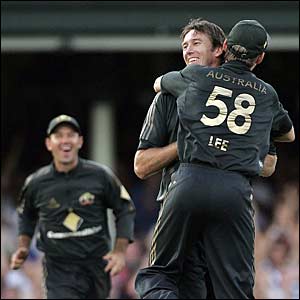 Highlight of the game, however, was a simply stunning catch by Dalrymple to take Watson.