Apparently these 2 guys are heroes. 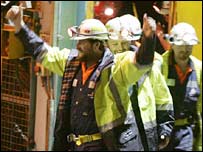 Todd Russell and Brant Webb are the 2 miners rescued after being trapped almost 2 weeks underground in a mine in Tasmania here in Australia.

Now, there’s no denying that they’ve endured a lot but are they really the heroes of the piece? Since their escape they’ve done the rounds in the US, appearing on various shows and pocketing a tidy sum which will be much needed given that the mine where they work has made most of the staff redundant.

But why are they being treated as heroes? Surely the real heroes are the men who worked ceaselessly to dig them out but no-one here in Australia could even tell you their names.

The danger for us is that we approach the Christian faith in the same way. We make much more of the rescued than the rescuer. So who is the real hero of the piece when someone gets saved?

Colossians 1:13 He has delivered us from the domain of darkness and transferred us to the kingdom of his beloved Son, 14 in whom we have redemption, the forgiveness of sins.

Some video of Noah