Now, it won’t surprise many readers here to learn that I’m not a great fan of the ArchBishop of Canterbury, Rowan Williams.
For a while I maintained a bit of a Williams-watch here at the White Horse Inn, keeping a record of Williams’ sermons and speeches and seeing if he might just possibly do his job; you know, radical things like point people to Jesus and tell us from the Bible about the gospel of salvation from the punishment of sin.

Sadly, Williams just doesn’t seem up to it. You can hardly ever get him to mention Jesus, let alone talk about Him in the way that the Bible does. That’s mostly because Williams hardly ever talks about the Bible either. 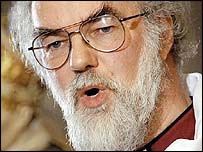 But I am ever hopeful. In particular my attention was caught by a new short series started on the BBC, where respected journalist, and now atheist, John Humphrys goes in Search of God. His first guest was Rowan Williams.

Now this is the sort of thing that gets me excited – an open discussion on the Radio, a chance for millions to hear a cogent defence of the Christian faith and an opportunity for the spiritual head of the Anglican Communion to point us to the great work of God in Jesus Christ, as revealed in the Bible.

How does Williams score? Well, I thought it might be interesting to see how well he did on the simple scoring method of “how often does he mention the Bible or Christ?” Does the word of God or the Word of God get a look-in?

Here’s the audio file. Come with me on an adventure….

5 minutes in. Score: word of God 0, Word of God 0.
Lots of talk about free-will, something the Bible never talks about. So far it’s just a philosophical argument in response to Humphrys’ very real question about suffering and Humphrys, unsurprisingly, is unconvinced.

10 minutes in. Score: word of God 0, Word of God 0.
According to Williams, God created a world in the certain knowledge that there would be suffering because God can do something with people in those circumstances, He has “more to do, more to give” … how does Williams know this? Because “his faith tells him that”. Williams says the answer to “where is God in this situation?” is, “where are the people who are alongside the sufferer?”
There is hope of healing “in God’s perspective, in God’s time”. Williams, at the end of this segment, makes the valid observation that faith means that for some people there will not be healing in our own timeframe. But sadly, so far, this is a completely empty hope – he’s given Humphrys nothing to base any hope in yet. Of course, he could have opened up his Bible and told of how the death and resurrection of Jesus brings enormous hope but, sadly, that seems beyond him.

15 minutes in. Score: word of God 0 (when Humphrys mentions the Bible Williams seems reluctant to follow), Word of God 0.
Is God an interventionsist? Does he hold back evil?As Humphrys notes, this is what He is recorded to have done regularly in the Bible! According to Williams, although this does happen there is already a level of “puzzlement”. The answer is that God is not a person alongside others but “the agency that is at work in everything”. Williams’ God, as he himself presents Him, is one that ” sets up the universe in a certain way”. This is almost deism. At times ” the membrane [the action of God in the world in “miracle”] is thinner”. Frankly, I don’t recognise this God. The God of the Bible is the author of history, intimately involved in every detail and sovereign over all. Williams’ God i, well, I just don’t know and I’m sure Humphrys doesn’t either.
Humphrys returns to the problem of freedom of will vs sovereignty. For Williams, our freedom as part of God’s image, is God acting. Where on earth is that from?
Humphrys is on this – if we are free then why do we pray? Williams; they prayed in Auschwitz because God is always to be praised (Amen) or they had nowhere else to go. Williams prays in order to focus, somehow make a channel for God’s action to come into a situation.

20 minutes in: Score: word of God 0, Word of God 0
Back to the search. Humphrys says he has failed to hear from God. Why can he not have faith? He wants it as sincerely as Williams.
And then a classic moment!!! This is gold. Williams asks “what do you want to believe?”
Humphrys:

Humphrys wants to make sense of the world. Williams has said to him “i don’t know, but I believe”.
Here Humphrys encapsulates all that is wrong with Williams’ presentation. It is the “faith” of Kant, the unexplainable. But it is not the faith of scripture, that faith is a sure trust based on known facts.

At this point Williams is genuinely struggling. He offers “silent waiting on the truth”. I feel like screaming out, “open up the Bible!!! Show him how Jesus walks off the pages! SIR, WE WOULD SEE JESUS!!!”. But no.

Humphrys tries again. He has a 6 year old child who asks why God allowed Africa to be bigger than England. How would Williams answer? Williams would suggest asking someone who believes in God and we’re off into the question of belief. Is it like believing in Santa Claus or instinctive? But neither of these are the Bible’s answer. For Williams there is “an instinctual response to the world that is religious” that gets squeezed out by the Western C20 mindset.

2 thirds through and Williams has not even started to provide a properly Christian answer.

25 minutes in: Score: word of God 0, Word of God 0
Humphrys asks, why does Williams not try to convert others, even Humphrys? Why not the Muslims, the Jews?
Williams could only get to the point of “you must believe” by listening and understanding. Apparently the church did “not blaze out into the Graeco-Roman world saying “this is the truth, you must believe it” “. Instead they said “what you’re saying has a much fulller expression in what we’re saying”. um….. yeah.
Humphrys brings up the Crusades. Williams is right to note that this is a bad episode and makes the telling observation that religion and geopolitics don’t mix.
So, Humphrys asks, wouldn’t taking religion out of the world stop all that? Williams rightly notes that there would still be strife and it’s a cop-out to say that religion has made it worse.
What about extreme Islam? For Williams the answer is that bad religion is a problem, good religion is a solution.
Still no mention of Jesus.

And it’s over: word of God 0, Word of God 0.
Faith is gift, why has it not been given to Humphrys? Apparently it is there for him and Williams has a longing that that sense comes alive in him. Humphrys is not predestined to unbelief but God stands at the door and knocks. If Humphrys doesn’t open that door then he is not fully in the company of God. After death Humphrys may realise he got it all wrong but it would not be too late – we continually have the chance to say yes or no. Apparently God alone can judge how much of Humphrys’ resistance is willing and that which gets in the way. A terrible doctrine of sin, if it’s even that.
Isn’t the reality that we can’t really know? Williams “can be confident enough to say ‘this is where my life must be … this is as clear or certain as it gets’ “. Which, frankly, it is not, clear that is. Others can’t be persuaded or made to know although there is hope and love for Humphrys.

So, there you have it. Williams has just short of half an hour on public radio to defend the Christian faith and he can’t even once make an argument from the Bible or, even worse, mention Jesus.

The Structure of the Prayer of Consecration

all the latest Anglican News

the Incarnation as Revelation

3 comments on “Rowan Williams the Apologist – or “how NOT to mention the word of God or the Word of God.”