So, the film is out. What do the critics say?

According to the BBC, “Ron Howard’s adaptation of The Da Vinci Code, which debuts at Cannes Film Festival, fails to live up to the hype that surrounded Dan Brown’s novel”. No doubt you’ve read similar things yourself. If it’s true then Brown is going to be particularly disappointed because a good reception is vital to his cause.

These days joe public hardly ever take times to deeply consider the arguments put before them, instead they go with clever rhetoric and what feels right. Sadly for Brown, while this may have worked for the book it looks like it will come undone for a film which the critics say just doesn’t work. If that’s the case then I reckon The Da Vinci Code film is a wonderful opportunity for Christians – it asks all the right questions (can you trust the Bible? and did Jesus really die and rise again?) and then provides answers that are both unconvincing in both their substance and style of presentation.

Here in Sydney churches are leaping at the opportunity. My old church boss has hired out the local cinema’s main screen – that’s 500 seats – for an evangelistic event.

The Reverend Craig Roberts said about 500 tickets had been sold.

“It’s a big movie; it puts two of the biggest questions on the agenda,” he said. “Can we trust the Bible and did Jesus rise from the dead?”

He said while there would not be a formal discussion on the film at the screening, the audience would be given a card advertising the website challengingdavinci.com and an invitation to attend a seminar at the church on Sunday.

I spoke to him on the phone tonight and they’re practically sold out. What’s more a local journalist has already asked to come along to a Christianity Explained course, not for a further article but out of personal interest.

Others, however, are using the churches’ interest in the Da Vinci phenomena to make the same old tired points…

Referring to the event that St Augustine’s are putting on, Megan Rellahan of thecelebritycafe.com writes,

Cards will be passed out at selected theatres, directing audiences to visit challengingdavincicode.com. Meanwhile…..reports have just surfaced of pastor, Reverand Daryl P. Bujak’s arrest for spanking a 12-year-old girl with a wooden stick to punish her for claiming that she was sexually abused by a relative. The girl’s parents first took her to the pastor because they didn’t believe their own child’s accusations. She was then regularly spanked for two months and suffered from bruises and welts on her legs and buttocks, said Elgin police officer, Michael Turner.

The allegations can be read about here

All this under the headline “Religious Hypocrisy”

What arrant nonsense! How on earth is a church pastor in Sydney, Australia linked to another pastor in Elgin, Illinois? What is Megan talking about? Hypocrisy? That’s like me saying that Megan Rellahan is a hypocrite for writing about the Da Vinci Code because a reporter last year filed false reports for the New York Times. Laughable. 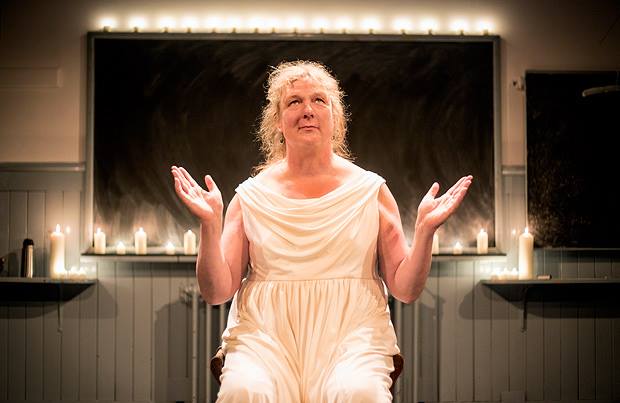 Statement from Diocese of Manchester on “Trans Jesus” Play