In a move that can only serve to push the Anglican Church of Australia into much deeper crisis, the Bishop of Newcastle Peter Stuart has written a Pastoral Letter where he signals his approval of clergy conducting a blessing of couples married in a same-sex marriage.

In his familiar style, Stuart does not explicitly state the change of conditions but his meaning has been clearly understood by its recipients:

Clergy and lay representatives to the Synod will be aware that my view, formed after wide engagement with others, is that, despite some commentary to the opposite, the legal and pastoral fact is that a member of the clergy of this Diocese, at this time, is not prohibited from using the ‘Wangaratta service’ or a similar service.

Request – It is my request to clergy that should they seek to lead a service of blessing for persons of the same gender who have been married according to the Marriage Act within a church building within a Parish that they ascertain, well prior to the service, that the Incumbent and Parish Council of the Parish have confirmed by resolution recorded in the Minutes of the Parish that they are willing for the church building to be used for that ministry.

Bishop Stuart also addresses the means by which this could be officially approved in the diocese. This may be since the original bill has technically lapsed since it was first passed. Nevertheless Stuart argues that the Diocesan Council (effectively the standing committee for the synod when it is not meeting is an appropriate vehicle for such approval,

It is up to our Synod, or the Diocesan Council as its delegate (when it has the proper authority), to change ordinances or change which canons are in force. I know that some people lament that Synod is the forum for this work but in our Anglican way, it is the forum that is created to exercise these exact responsibilities.

It is understandable that Bishop Stuart would not want to return to synod this year to get the entire diocese’s approval. When the original bills were passed there was outrage from orthodox Anglicans who complained that the handling of the vote was “a stitch up” describing the bishop’s actions at the time as a “breach of trust” and that “Conservatives and evangelicals have been treated with contempt”. davidould.net understands that a large number of clergy and parishes in the diocese are now speaking to Gafcon about alternative oversight.

Readers may wait with keen interest to see if the Primate and other diocesan bishops who have been openly critical of Gafcon in recent days will respond with equivalent language and tone about this unilateral move by the Bishop of Newcastle.

Stuart closes his letter (embedded below) with the call to “be strong in our common bond of faith”. It now appears that many in his diocese will see this as a final deliberate breach of that bond. 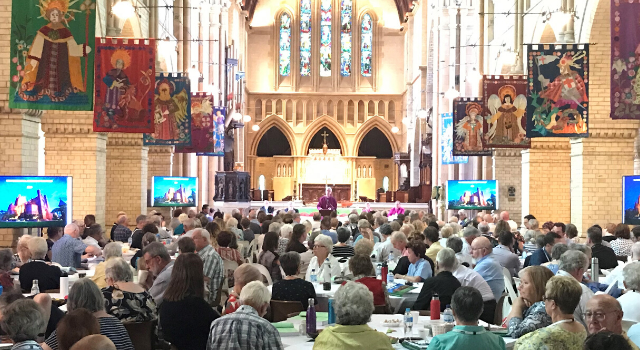