The Archbishop of Sydney, Dr Glenn Davies, has issued a statement in response to a vote by the Synod of the Diocese of Wangaratta to authorise a service to bless civil marriages. The Bishop of Wangaratta has claimed this service would allow for a blessing of same-sex unions and that he personally intends to use it for that purpose.

Archbishop Davies said “It is highly regrettable that clergy and lay people in the Diocese of Wangaratta have chosen to follow their Bishop rather than the clear words of Scripture concerning God’s design for human sexuality (Matt 19:4-12).

The doctrine of our Church is not determined by 67 members of a regional synod in Victoria nor is it changed by what they may purport to authorise.

Time and time again, the General Synod has affirmed the biblical view of marriage as the doctrine of our Church. To bless that which is contrary to Scripture cannot, therefore, be permissible under our church law.

The circumstances of this event are reminiscent of the actions of the Diocese of New Westminster in Canada in 2003. It is now universally acknowledged that those events were the beginning of the ‘tear in the fabric of the Anglican Communion’.

Moreover, to claim the authority of our Church to carry out a service of blessing contrary to the biblical view of marriage and the doctrine of our Church will certainly fracture the Anglican Church of Australia.”

davidould.net understands there is now considerable activity behind the scenes, including detailed correspondence with the Primate.

Were a disciplinary procedure to be moved against Bishop John Parkes it would be under the Special Tribunal Canon 2007. It is entirely likely that one action that would trigger such a move would be Bishop Parkes presiding at the now much-publicised blessing of the upcoming marriage of Archdeacon Emeritus John Davis and Robert Whalley. 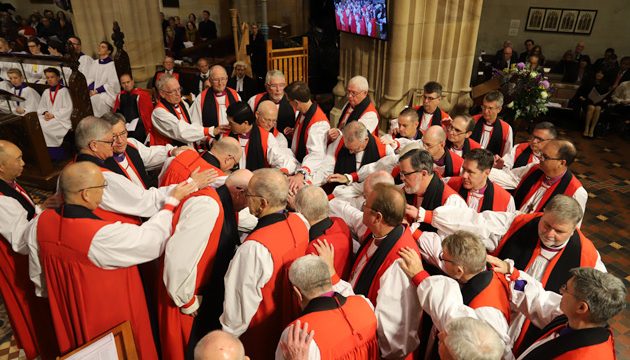 3 comments on “Archbishop of Sydney Responds to Wangaratta Vote”