I’ve been engaging in an interesting exchange with Susan Russell on her blog, “An Inch at a Time“on her latest post, “Speaking of the Primates”

Susan has posted up the following picture 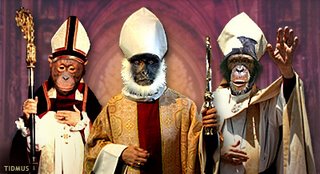 * from colleague Jim Naughton: “Archbishop Ndungane once told me that the difference between a monkeyand a Primate is that monkeys cannot make Primates of themselves.”

As you might expect, some have taken offence at this picture. I was one of them and so I left a comment. Here’s the whole list of comments up to the time of posting this entry..

While your words were well heeded, I found your use of the image of monkeys totally dishonoring. This disrespect takes away from all the good that you are attempting to do.

Thanks for taking time to write. I thought it a funny illustration of Archbishop Ndungane’s comment about primates making monkeys out of themselves … a comment he’s certainly entitled to make because he is one (a primate that is.)

I realize humor is often in the eye of the beholder but it made me laugh … and this is my blog and I’m still convinced a little laughing at ourselves is good medicine once in awhile.

Sorry you were offended.

except, of course, you weren’t laughing at yourself, were you? You were mocking someone else – a completely different thing.

David … So the Primates are off limits and illustrating a comment by Archbishop Ndungane poking fun at the “monkey business” going on amongst them is going too far?

Sorry — I’m at the point where I figure if the miter fits then let them wear it. It’s time to reclaim the hermenutic of suspicion when it comes to bishops who have gotten too big for their britches — even if some of them are Primates.

I don’t recall saying that the Primates were off-limits.

All I noted was that you said that “laughing at ourselves is good medicine” and I questioned how this could be a defence of laughing at someone else.

I’m all for self-deprecation; “laughing at ourselves”. Mocking others is another thing. Now, if you want to also claim that “laughing at others is good medicine” then go ahead – but that would be a new thing you’re saying.

And you didn’t see +Ndungane doing precisely that?

Again, if the miter fits, wear it.

In response to this last one I posted:

+Ndungane may have done so, but you don’t have him in your sights, do you?

honestly, now. You have people like Akinola in mind, don’t you? So you are not “laughing at yourself” but you’re laughing at someone else.

Furthermore, you’re using imagery that is incredibly offensive to many black people. At least it was to those black people that I have worked with – those that you know may differ.

That was an hour and a half ago. All my previous comments got approved in about 10 minutes.

the liberals still don’t get it?

One comment on ““an inch at a time?” but in which direction?”