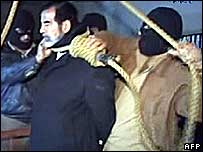 I’ve mulled a bit over posting this but I thought it might be informative for readers to know where to look for details of the event.

No point pretending now that a full video isn’t available. Here it is.

If you’d just like to read an account of the whole video then the BBC has an excellent narrative.

I’ve argued previously that there is a biblical defence, indeed a mandate, for the death penalty. Now is, of course, probably not the best time to reopen that discussion and that’s not what I intend to do here, but I would observe that the case of Saddam is probably a bad test-case for this issue. It’s highly emotive and the depths of the man’s crime actually (to my mind, at least) confuse the question and bring about an emotive response rather than the reasoning from scripture that we should all be engaging in.

Ultimately it’s a very sad occassion, for Saddam’s death brings no real change to those who cruelly mocked him as he died. There is a great irony that Saddam appeared one of the most dignified men in that room.

And deeper still is the tragedy that those that mocked him have still not understood that it is not immorality that sends a man to hell, but not trusting in Jesus Christ. God have mercy not just on Saddam Hussein (although it is too late now), but the whole nation of Iraq and the Muslim religion.

Rowan Williams the Apologist – or “how NOT to mention the word of God or the Word of God.

Jefferts-Schori: How not to listen to anyone at all

The Structure of the Prayer of Consecration

Mel Gibson eat your heart out