so, in a vain attempt to get Ethan to go to sleep, he and I took an after-lunch stroll down King Street where we live here in Sydney. As you do when you have a child in a pushchair that you want to get off to sleep I visited almost every shop of even remote interest on the way. One of those was T2, a chain of tea shops with a funky flash site. As I enter a shop assistant wants to know if I would like to try one of their ice teas. There’s 4 there to choose from but the last attracts my attention.

French Earl Grey! Now I trust I don’t have to point out to you the incongruity of such a name. Earl Grey tea is named after Charles Grey, 2 Earl Grey – British Prime Minister in the 1830’s not long after England was at all-out war with France.

“What’s that?” I hear you say, “was there ever a time when Britain wasn’t at war with France?”

Not really, my friend. If ever God created 2 nations to stick it to the other then it was Britain and France.

So, to name a tea French Earl Grey – well, it’s like (as my good friend Greg Griffith might put it) naming something “Texan Yankee”.

Glad we’re all clear on that. 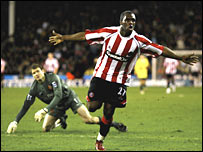 It’s been a downright dreadful month or two for English cricket. Currently standing 0-4 in the Ashes series vs Australia has led to all my friends here in Australia paying particular close attention to my emotional status.

Yet, there has been joy elsewhere for Sheffield United managed to beat Arsenal yesterday! Unbelievable. A salve to my bruised soul.

How to Vote Today